Have fun and see Oxford a different way

You’re going to Oxford and you want to have some fun. There are so many gorgeous bits to see, it's hard to know where to start.

It’s no fun wandering aimlessly. Feeling like you’re missing the cool areas or the lesser known sites. You don’t want to spend all your time looking at your phone, not actually seeing anything. With your other half getting bored and hungry.

What about planning your own route and hoping for the best? Sounds like a lot of work trawling blog posts and reading reviews. And you’ll probably miss the hidden gems as all the blogs just list the same attractions.

Will you find the hidden alleyways and pretty back-streets, or will you flog past modern shops and noisy buses on the High Street?

You know Oxford is full of stunning buildings, quirky old taverns and thousands of years of history. It’s just a question of having fun seeing it all. 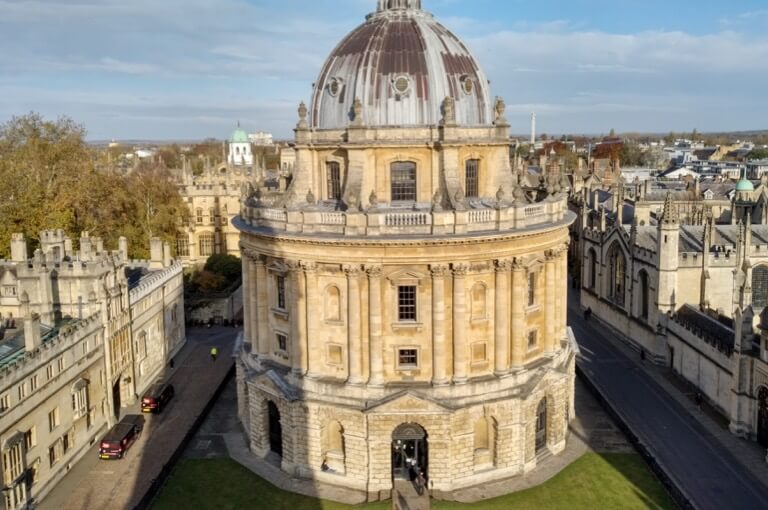 Take a carefully designed route through the streets of Oxford. You'll sneak past colleges, explore hidden alleyways and pass the main sights like the Radcliffe Camera and the Bridge of Sighs.

See the famous bits like the Bodleian library and the Radcliffe Camera, and also spot things hidden in plain sight like the mythical creature that's part swan, part eagle.

Learn interesting stories like the lovestruck daughter who murdered her father with a poisoned "love potion". 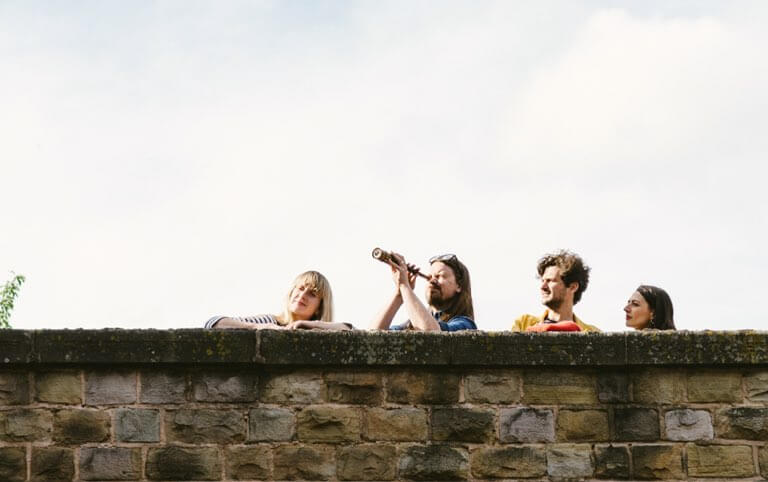 Go at your own pace. If you're tempted by a cafe or fancy popping into a medieval tavern, that's fine, there's no hurry.

Play with friends and family. It's private and self-guided so you can avoid the crowds.

Treasure Hunt Oxford will take you on a fab route around the city, spotting clues and following treasure maps, all at your own pace.

Go on a great adventure 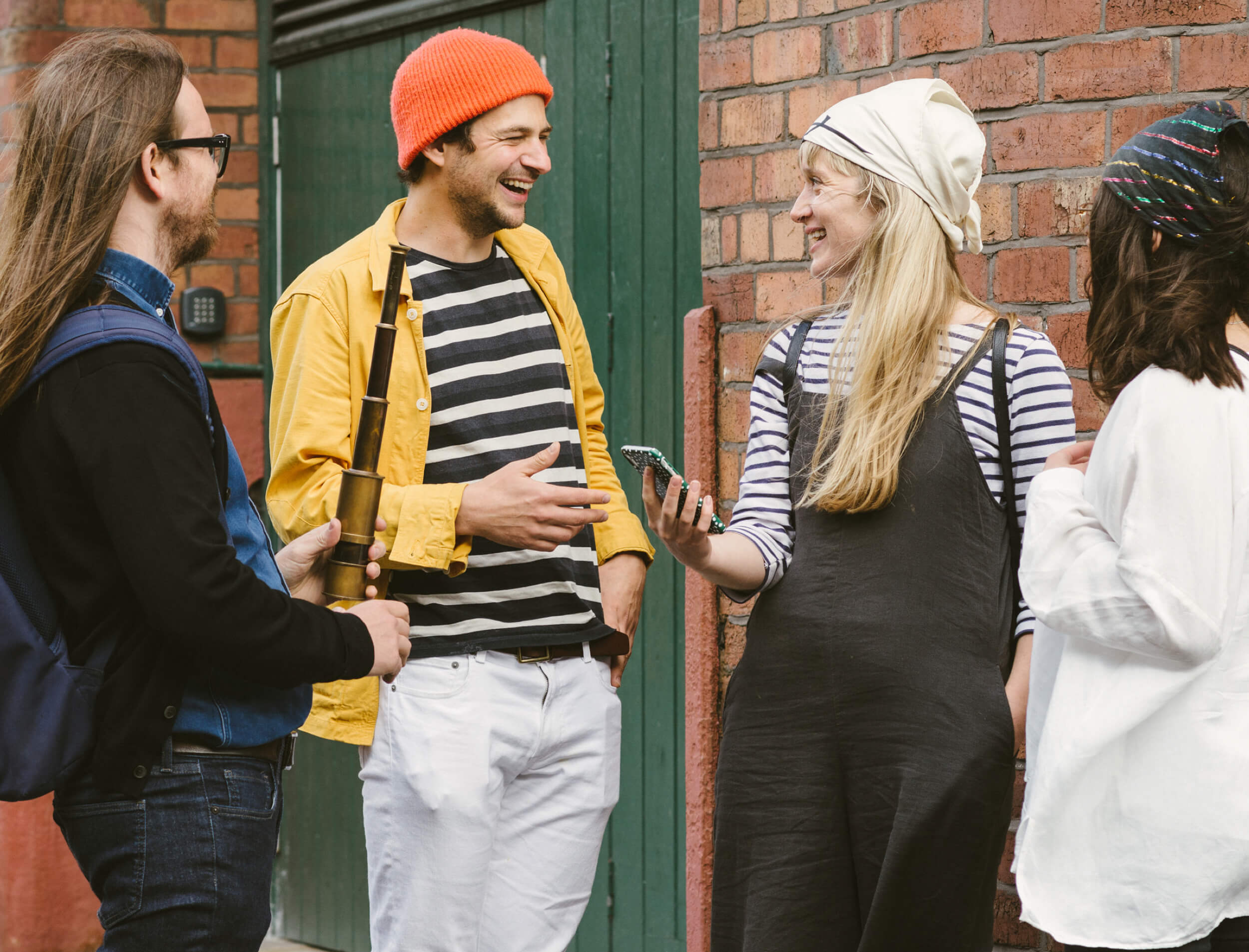 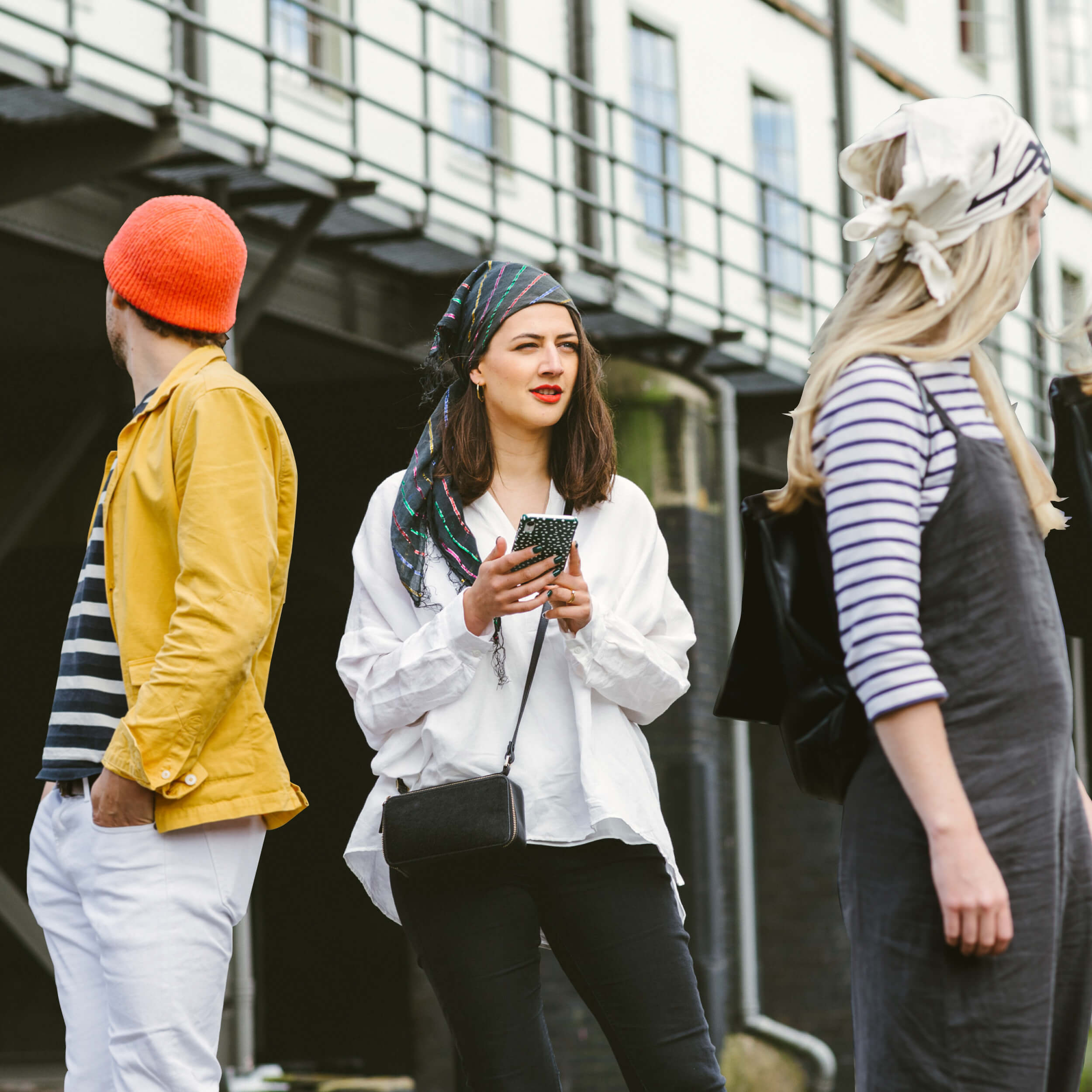 Great way to have fun during the pandemic”

We thoroughly enjoyed the Treasure Hunt. It was a good length and the clues both made us think and showed us parts of Oxford we'd never noticed before, and we're local! The brief pieces of educational information were interesting and informative in equal measure, and all were accessible despite Covid restrictions. It was a fun way to spend a pandemic birthday!

A great way to spend an afternoon”

A great way to see Oxford, at your own pace. Even having lived in Oxford for 2 years, we still learnt new things, and saw things we wouldn't have otherwise. The text chat format of displaying new clues and instructions was very slick and well done, and the information provided was useful and interesting.

It works like WhatsApp,
so it’s easy to use

You don’t need to download or print anything and it doesn’t need any permissions.

Plus, you get to start when you want.

Bess sends you a series of treasure maps, leading you around the city.

The clues and maps are a lot of fun.
This is a great way to see the city!”

Captain Bess Now for a change of scene, let's head down by the river...

Bess sends you a series of clues and you have to search the city for answers.

Good banter from Captain Bess who sends you the clues!”

Captain Bess A family firm,
who slowly became
Forgotten and faded,
what was their name?

Captain Bess Nay, yer askin' to be walkin' the plank!

Along the way, Bess will tell you a few interesting facts and stories about the things you're spotting!”

We learnt new things and actually appreciated the beautiful scenery as we went around the city. 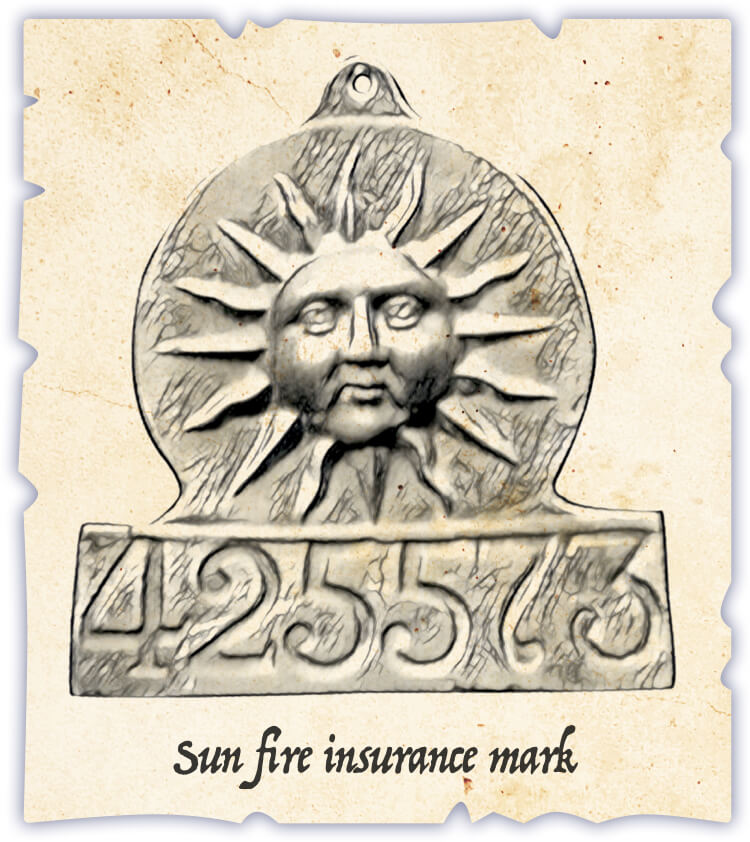 Captain Bess will invite you all to join the hunt!

We had such a laugh and a great day out!

Captain Bess Ahoy there! Ye must be the one they're talking about. Lookin' to join me ship, the Rising Pearl?

Captain Bess Ye'll be needin' help, have ye a crew?

A different way to see Oxford

A treasure hunt is more like a game than a traditional tour. You have to follow treasure maps, solve cryptic clues and keep your eyes peeled to find the answers.

You’ll have some banter with our friendly pirate Captain Bess. She’ll put you in your place if you get too many answers wrong!

Take your time, go at your own pace

You can start when you like, there’s no fixed start time. You can even finish the next day if you get stuck in a nice pub!

Fancy stopping to climb the University Church tower? That's fine, take it at your own pace. Enjoy the city and stop whenever you like.

Get to know Oxford the fun way!”

One of the best things was that you could go at your own pace and stop for a pint if you felt like it or found an interesting pub (of which there are many). Really great to see some of the quieter less known parts of the city as well as the famous ones.

It’s all on your phones, there’s nothing to print or collect.

Book online and you’ll get a link to start your game straight away.

You can rearrange or cancel

We’re flexible. Plans change - if you can't make it to Oxford, you can play on a different day or cancel for free.

Fun or your money back

If you don't have fun, we promise to give your money back. We'll ask for a quick chat on the phone to understand what went wrong.

You'll see the best of Oxford 🧭

No spoilers... You'll see Oxford's main sights, but the real fun is spotting things you normally wouldn't, and taking the lesser-known alleys around the city.

The treasure hunt was very well designed and offered opportunities to see parts of the city that we might not have found by ourselves. It’s great to run through it at your own pace and take breaks as a when needed. Also offered up some very interesting bits of history as you are going around as well. Would recommend anyone to give this a go. 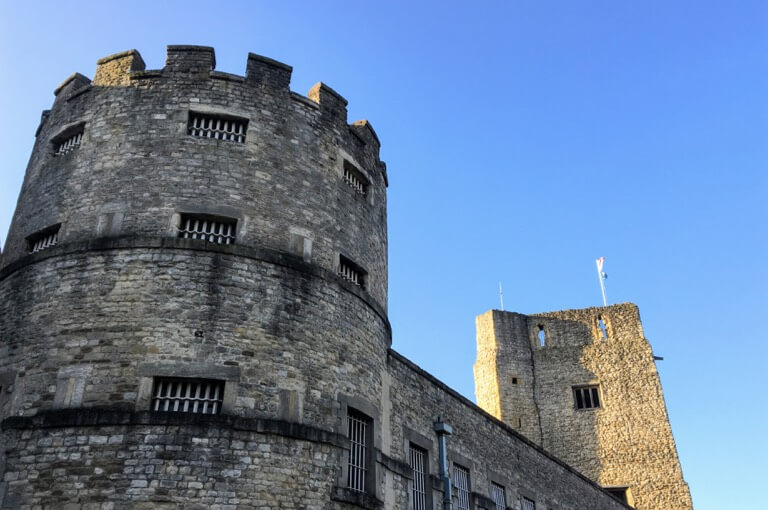 Brasenose, Corpus Christi and Trinity College - just three of the prestigious colleges of the University of Oxford you’ll discover on this tour.

University Church of St Mary the Virgin - a stunning church overlooking the Radcliffe Camera, with breath-taking views of the city 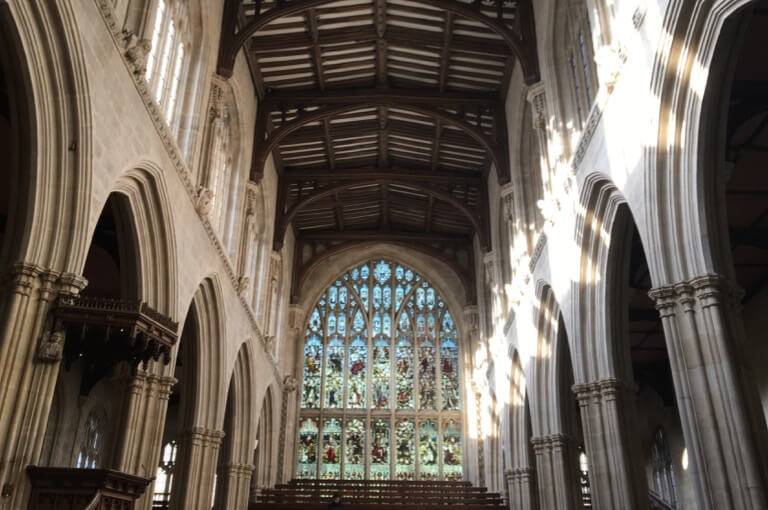 Turf Tavern - hidden away in a maze of back alleys, this historic pub is full of character.

St Michael at the North Gate - with its Saxon Tower, this church stands on the site of the north gate through the medieval city. 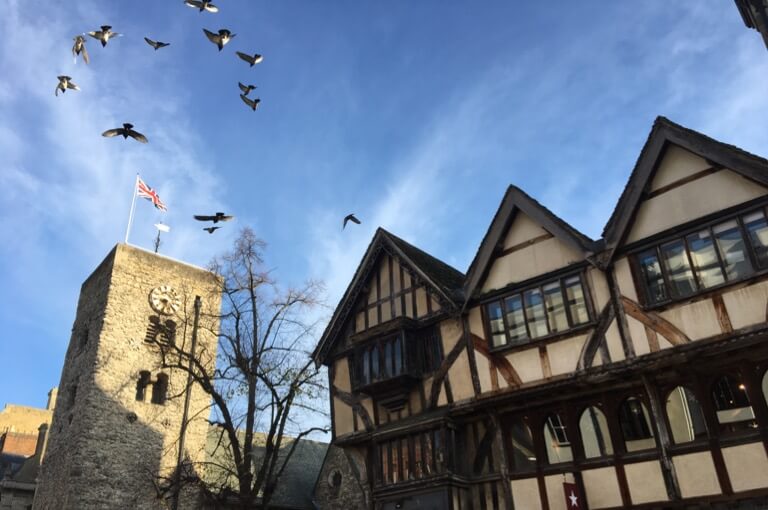 Divinity School - a masterpiece of gothic architecture, this medieval building was built between 1427 and 1483.

The Sheldonian Theatre - this majestic theatre was designed by Sir Christopher Wren. It hosts concerts, talks and lectures.

Bodleian Library - the main research library of the University of Oxford and one of the oldest libraries in Europe.

Carfax Tower - situated in the centre of Oxford, this landmark belltower dates back to the 12th century! 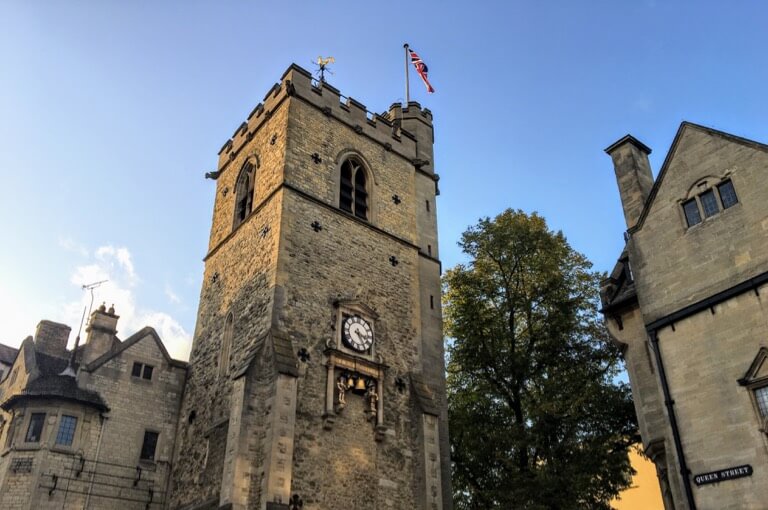 "Bridge of Sighs" - because of its similarity to the famous bridge in Venice, Hertford bridge is often referred to as the Bridge of Sighs! 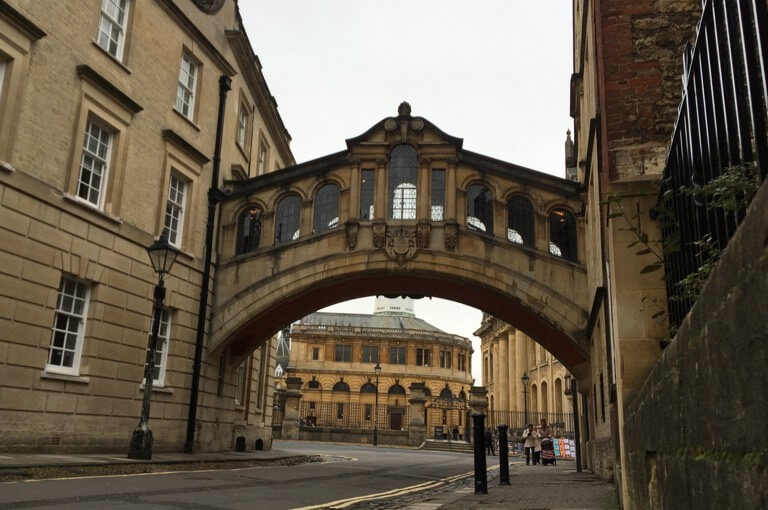 By the end, you'll have a good feel for the city and you'll have ideas of what to go back and see again.

What if it rains?

If it's stop and start rain, you can pop into a cafe or tavern along the route. There's no time limit.

If it's raining harder you can play another day, or even play over two days if you like.

If it's really heavy rain and you don't fancy wading through the streets, we'll give you free cancellation, even if you've started the game.

Treasure Hunt Oxford is all outdoors in public spaces. The route is designed so you can avoid other people and everyone can play on their own phones.

Read our full guidance for playing.

Will it be too difficult?

Don't worry! The treasure hunt has some tricky clues, but if you get stuck you can ask for a hint.

We'll make sure you don't get completely stuck, lost in the city's ancient alleyways...

Will I have fun if I'm from Oxford?

Yes! You already know the city, but we bet you'll notice things you've walked past a hundred times before.

We've worked hard to find the less-obvious stuff - beyond the typical blue plaques - and some interesting stories and anecdotes. You're going to have a great time!

Is it suitable for kids?

The game is designed for adults and curious kids aged 8 and up.

Younger ones are welcome though you may have to help by interpreting the clues and Captain Bess' pirate speak.

We’re a family of four with a 13 year old and a 11 year old. Mum was map reader, dad reminded kids about clues, and kids were hunting for clues.”

Great to explore Oxford and spot unexpected details. With 11 and 12 year olds, the clues were engaging and a great way to motivate a walk.

Will it be too physical?

It's 2½ miles walking but there are nice cafes and pubs to rest along the way.

Ready for a different way to see Oxford?

FREE cancellation for any reason